I’ve been writing and painting and sketching. The writing is flash fiction, poetry (new: Gone), blog post (ta-da), etc.  One of my latest is a flash story, from assigned prompts, titled Bait. I missed the deadline to submit as I was on ‘Nanna’ duty. Being Nanna takes priority any day.

I’m doing these exercises to help me break the mental blockage on my large work in progress, Irregular Orbit.  I’m +40k words into it now. It is a sci-fi novel, heavy with universe / world building and character development.  I am struggling with getting onto paper what I see in my mind, how the story goes, how the characters evolve, how good and evil can switch places before the actors recognize what’s occurred. It is broad and beautiful in my brain… now if I can just get it onto the page intact.

Overcoming the ‘stall’ is challenging. Fortunately, I’ve developed a good social network of writers. Online and in-person groups of talented and successful authors who, in varying degrees, have their work in the hands of readers.  This has been hugely helpful. The writers help me hone my craft and sharpen my skills. They provide real feedback.  Not polite platitudes of ‘oh, that’s nice, you write so well’ but the real, “hey this is awkward,” or “this doesn’t work the way you meant,” or “this word is flat wrong,” feedback.  It has been a good exercise in actually sharing my writing as well. Not hiding it in files or on obscure blogs. 😉

I’ve committed to posting an excerpt from I.O. here by the end of the month. Stay tuned!

I had a couple comments from the writer’s group about my character, Teaka, from my flash fiction entry: Evolution.  I had confused some readers by not providing a clear enough description. I thought I’d share the crudely executed character sketch I cobbled together. I am not much of an artist but it gives a general idea.  Think.. sentient song bird with arms and hands. She loves to preen with her comb and horde the treasures from her little bags of stolen goods…

I occasionally write  – flash, splash, crash, dump- fiction when some weird thought pops into my head and I can’t focus on what I should be writing because it won’t leave me alone.

This is one of those… please, have a read and leave me comments on how to improve the dialog…

END_OF_DOCUMENT_TOKEN_TO_BE_REPLACED

It has been another whirlwind couple weeks. Writing took on a bright shine as my interaction with the Facebook group “Write Around the Block” has fired some sleepy brain cells into creative action.  Evolution got fairly good critiques and I was happy the readers didn’t pan it as drivel.  Jasmine didn’t make the long-list for the Australian Writers’ Centre, June Flash Fiction contest.  I’m ok with the outcome, the talent pool is deep, the skill sets are wide and I am a babe patting wet sand on the shore. I’ll keep working. I like the story.

I am just starting to get things out into the public eye, beyond the eyes that see things here.  It was quite the jump for me.

The painting I entered in the art show received little comment. I’m happy in that regard as it was quite challenging for me to let it out there.

All these exercises are me, working to be more me.  I am trying to be less in the “closet” when it comes to art and writing.  These are my winsome babes, perhaps with faces only I love. Yet, I have pushed them from the nest (my soul jumping with them) in an effort to hone my craft, sharpen my skills and spread my wings. Fly or fall, lessons are learned and applied. I’ll take critique, apply what makes sense and continue.

On another note: Irregular Orbit is making its way through my creative process.  It has been 8 months since the seed sprouted. It has resulted in 50K words and its about halfway to complete.  I’ve overcome the hurdle of the middle dregs… I found the catalyst to keep my characters moving along toward climax and resolution.  Onward, onward…

Greetings, I have been having an amazing time of late. Between travel (two great trips I’ll blog about later) and work and writing and playing Dungeons and Dragons (yeah, that one) I have been having a good run!  I’ll be posting some Flash Fiction I’ve been dabbling with in various contests.  The first is up in “Fiction and Poetry” tab.  Evolution is for a flash exercise, 1500 words, 55 hours, Location must include a boat of any kind and a bag of marbles… See what you think. Evolution

The novel, Irregular Orbit,  stalled for a while then sprang back to life, and is a slow haul. It is at 46k words now and is likely to head to 100k before first cuts and a bunch of hard core editing. I plan to have that one professionally edited as I feel like it will be something to publish when its done.  One chapter that I pulled out already feels like it may be a second in what may be a trilogy.  Lord help me.

I am back to writing more frequently now so I hope to see you here on a regular basis.

Until then… let me know what you think of the flash fiction pieces.

I art diligently working on this novel, Irregular Orbit.  I am having a good 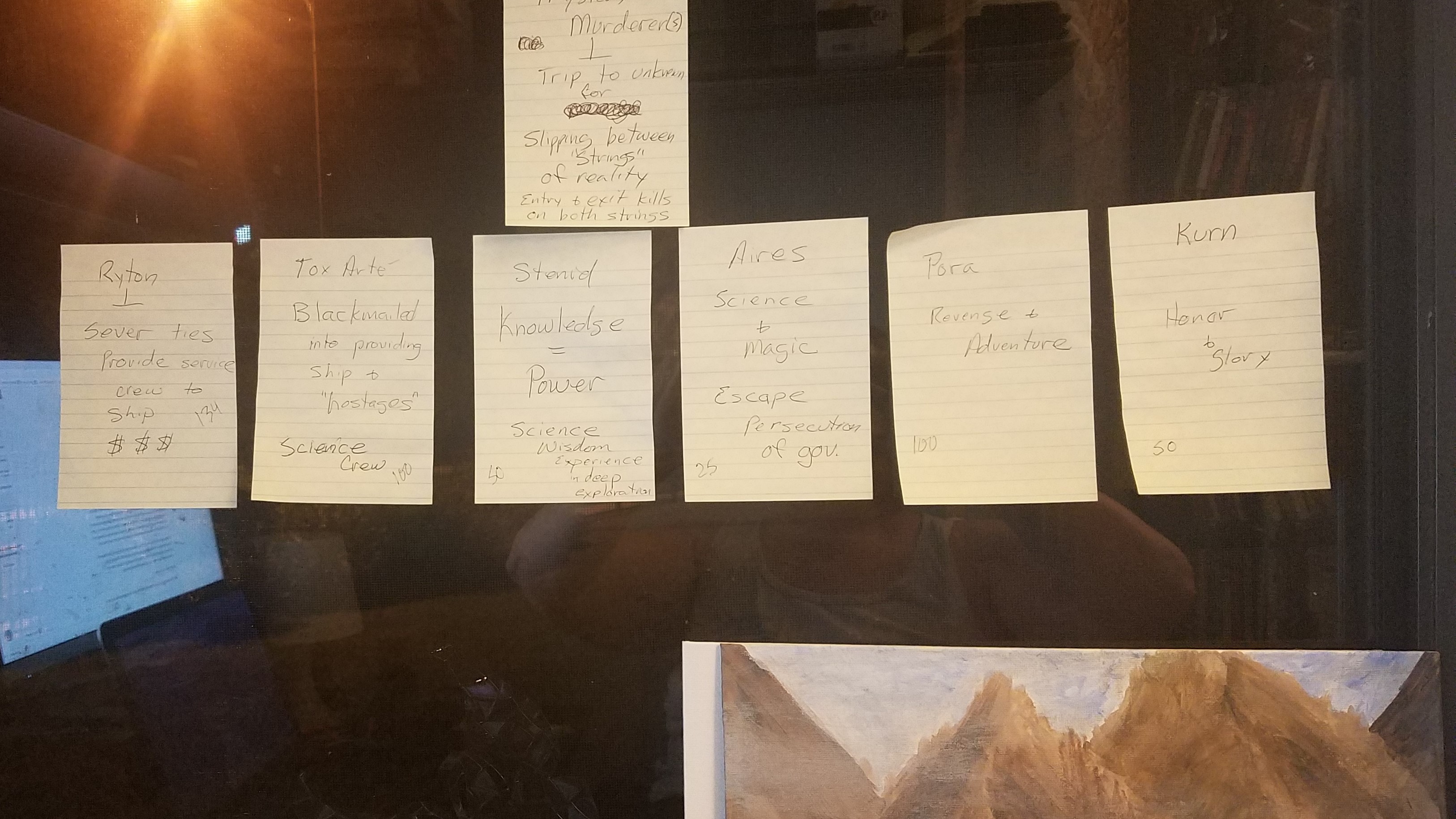 time letting these characters tell their tale of space mystery and murder. They are rich and deep with holey formed personas and motivations. They story flows and grows and forms around them, like a gaseous cloud in this vast universe. WOW!  I am 40K into the story… things are getting weird. Space Weird. String Theory weird.

I have met a wonderful and supportive group of writers. Most of them are successfully published and doing tours and things. Most are mystery writers, a few write historical fiction, one is giving the classic detective serial a new face, one writes stories from a dog’s perspective. There are poets and biographers. One woman is writing the story of her marriage and her husband’s descent into Alzheimers. She make me cry every time she shares. There are new writers too, who like me have been at this a while but just surfacing.  I have to say, having a community of like minded writers makes me want to show up and present my best every Saturday.

Having support is key to success in many endeavors and writing needs bolstering more than some hobbies.  Breathing life to a work is exhausting and exhilarating and terrifying. It takes a village to keep you sane and producing. It takes a calm set of mentors to encourage cruel edits without undermining courage.

It takes coffee. Lots of coffee.

Not those Keys… these keys, keyboard keys.

Not the whole weekend either. Just some of it, between chores and laundry.  I did my first reading at the writer’s group. Terrifying, satisfying. I received good critique, and good encouragement.

I’ve decided to use Irregular Orbit as my NaNoWriMo project.  Hopefully it will push me to get to “The End” on a project.

I have a beautiful, black, furry bit of serenity laying next to me as I write. Ah, to be a cat.

I added a new short story / writing prompt exercise in the Fiction and Poetry section.

I haven’t written much sci fi before so this has been quite fun… if you read it, leave me comment on if it is worth chasing a little more.

I’ve been painting, writing, going and doing. I went to an Axe Throwing class… it was totally worth every penny, so much fun! I highly recommend you find a groupon for one in your area.

I also joined a local writer’s group. They are amazing, many of them published, and intimidating to a certain extent. I love hearing them read, and the groups provides positive, solidly reasoned critique. To think that I may read some of my stuff with that advanced a group makes me worry but it will make me a better writer.

Write on… and on and on.  See you here again soon.

In looking through my site, I discovered very little occurred whilst I was completing my Master’s Degree.  My move to Pinellas County is complete and I no longer spend 2 hours a day on a delirious commute.

Huzzah! I have time to create!

I’ve been painting, allowing that to satiate my creative need but of late, writing has flared. Painting is not my passion but I do enjoy it… here are two from the heart and one from an instruction book… can you guess?  >ha< 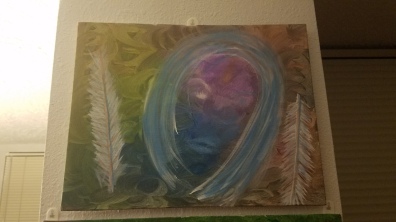 There have been many changes since I last posted (other than for coursework) and I am entering a new chapter in my life.  I’ve moved to a small place very near work. I am dating, sort of… trying to date is more accurate. I’ve been going out with friends, taking pottery and dance classes… I’ve been horseback riding, worked cattle, and am soon to participate in Axe throwing … Groupon is marvelous.

I’ve joined a writers group. A 30-odd bunch of professional and budding authors from every genera and walk.  They offer honest, gentle critique and input on works in progress. It will be good to hone my craft.

In research for a class assignment, I thought about two quotes from Benjamin Franklin:

“Freedom of speech is a principal pillar of a free government; when this support is taken away, the constitution of a free society is dissolved, and tyranny is erected on its ruins. Republics and limited monarchies derive their strength and vigor from a popular examination into the action of the magistrates.”

Those who would give up essential Liberty, to purchase a little temporary Safety, deserve neither Liberty nor Safety. This was first written by Franklin for the Pennsylvania Assembly in its Reply to the Governor (11 Nov. 1755)

Recent events in the world have new visibility and attention to topics such as border security, cyber security, religious security, security from uncomfortable words, fake news, real news and opinions which may differ from yours.  There has been a rise in labels: racist, terrorist, extremist, snowflake, feminist, fascist, alt-right, alt-left, and on and on and on.    There have been demonstrations for freedom, against freedom, for governments and against, for Security and against Liberty.

It’s enough to make one’s head spin. Or at least make one spin the channel to some drivel about cupcake and treehouse masters.  We must, for a moment, stop the hyperbole and rationally move back to the MIDDLE of the road rather than standing on the curbs throwing words and stones at the other side.  We are all on the same damn road.  We must begin to understand that compromise is not “loosing” and we must understand that this nation especially, was and is stronger by inclusion than division.  We must not give up Liberty for Security. We must not trade our rights, or the rights of others for feeling safe in our little bubbles.  We do not need to drown out the alt-right nor the alt-left with chants and screaming.  Discourse, intellectual discussion, LISTENING to the why behind the words helps us all understand. You don’t have to agree with someone to LISTEN, you don’t have to adopt another’s beliefs to be tolerant. To act and react with Love is the greatest commandment. Freedom of expression, in art, language, beliefs is a founding principal of this nation.  We must protect it, even if that means your internet isn’t filtered, your FB feed isn’t managed, your laws permit activities you don’t consider moral, and even if it means you must WORK a lot harder to understand truth. Liberty is worth working for…